Syphilis is caused by the spread of a spiral-shaped gram-negative bacteria that is transmitted from person to person through sexual or congenital (mother to child). 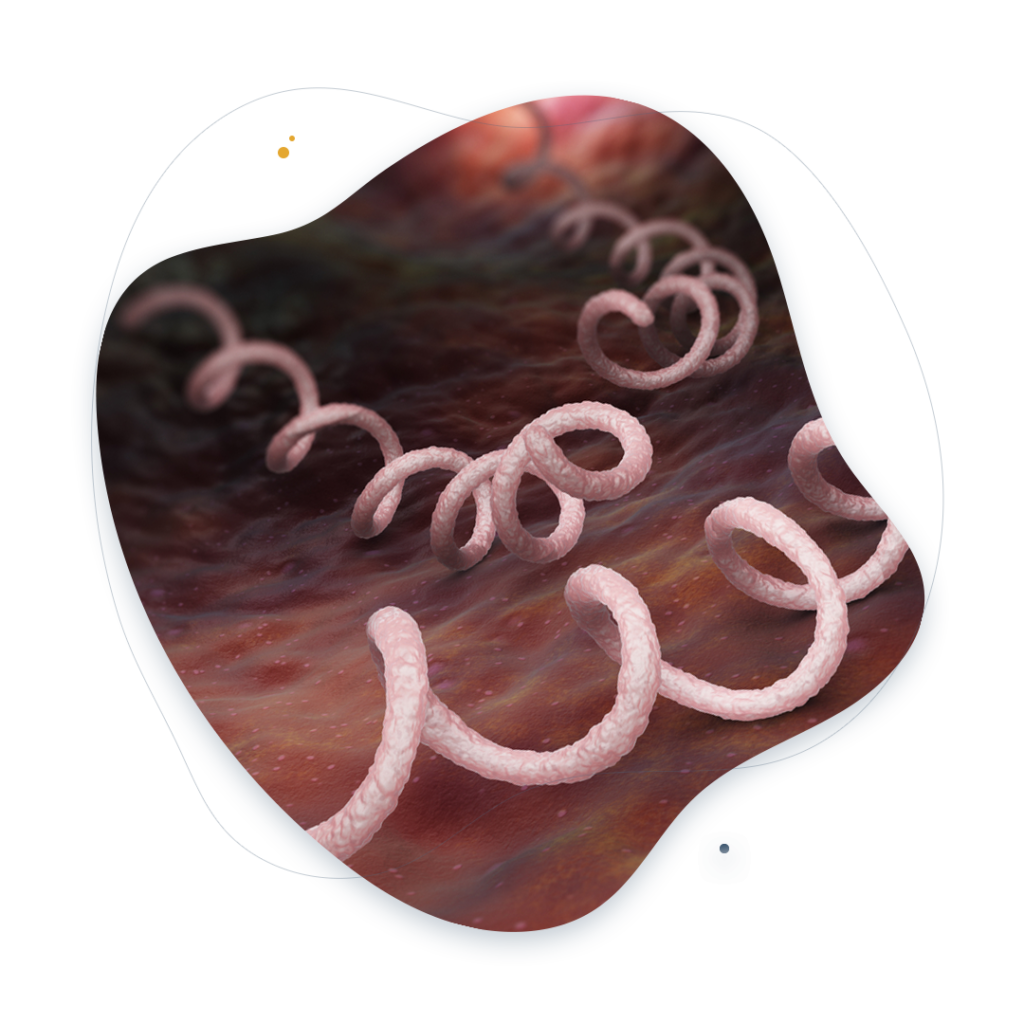 Syphilis is an infectious disease caused by the spiral bacteria Treponema pallidum. The initial manifestations of the disease are suppurative inflammations on the skin of the mucous membranes (genitals, anus and mouth), especially where the infection occurred. Syphilis can advance through clinical stages that could extend over decades, with periods of apparent health between stages of evolution, which increases the difficulty to treat the disease or stop it at the epidemiological level. 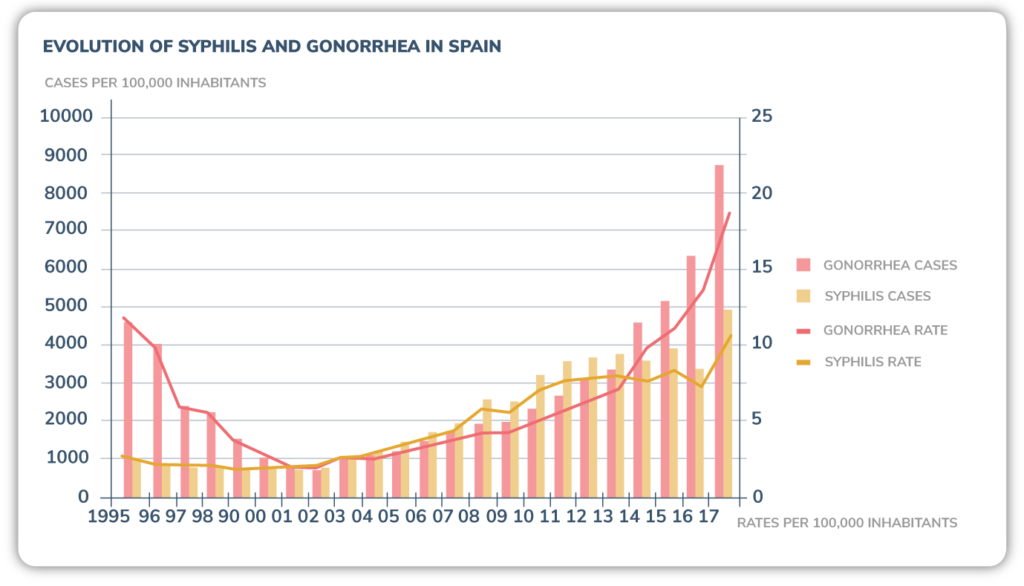 The most serious complications of untreated syphilis (or in association with other sexually transmitted infections) are meningitis and some cardiopathies and neurological syndromes of delicate prognosis, among others.

According to data provided by the World Health Organization itself, almost 6 million new cases of syphilis are reported each year around the world and a total of 50 million infected. This being an important public health problem in many lesser developed countries.

The increase in the incidence of the disease is due to a general increase in promiscuity in sexual relations and some unsafe or unprotected practices.

What causes the disease and what is its pathogenicity mechanism?

Syphilis is caused by the contagion of a gram-negative spiral-shaped bacteria that is transmitted from person to person sexually or congenitally (from mother to child).

This bacteria has the particularity of not performing the Krebs cycle (the one necessary to obtain energy from food) and therefore it’s forced to depend on other cells that do, to take its nutrients. In other words, treponema pallidum can only survive by infecting living organisms such as humans.

Infection by infected objects rarely occurs due to the fact that after a few hours of exposure to the environment, the bacteria would die from a lack of nutrients.

This bacteria causes damage to the tissues it invades because it generates highly antigenic substances such as the enzyme hyaluronidase, which breaks down the hyaluronic acid fibres in the dermis to penetrate deeper and reach the blood vessels.

In addition to this enzyme, it also possesses hemolysins, which reach the blood cells and destroy them.

The peptidoglycan of the plasma membrane and the flagellum (because it’s a highly mobile bacteria) also generates an important antigenic response in the organism. This response manifests itself in fever, malaise and allergic processes.

How is it transmitted?

Syphilis can be transmitted sexually (person-to-person) or vertically (mother-to-child).

During unprotected sex, the bacteria can be passed from one body to another through genital, oral-genital, or anus-genital contact.

If there are skin ulcers that can pass mucus-purulent secretion on the other person’s skin (even if a condom is used), skin infection can occur.

However, syphilis can also be transmitted during the intrauterine period with an infected mother (in congenital syphilis).

The risk of getting syphilis during normal sexual intercourse is 30 per cent. However, the probability of a child acquiring the disease during gestation is 80 per cent, so special measures must be taken to ensure that treatment is available as soon as birth occurs.

Another form of contagion, much rarer in Spain, although somewhat more frequent in other countries, is through blood transfusions without prior analysis, a dangerous practice that is currently quite regulated by the health authorities of almost all developed countries.

Having had syphilis in the past does not protect against re-infection, which is in fact quite frequent.

What are its symptoms?

Syphilis can produce a high number of signs and symptoms, making it difficult to make a differential clinical diagnosis concerning other infectious diseases.

Within these symptoms are:

The treatment of this disease depends on the evolution it has had in a course of time and the signs and symptoms it has manifested.

It begins to manifest around day 21 after infection and may vary depending on each individual's immune system. During this stage, the disease is characterized by the formation of a painless ulcer (chancre) on the external genitals, anus, or buccal mucosa, where initial transmission has occurred. Swollen lymph nodes in the area (adenopathies) also occur.

A chancre is a small, painless ulcer that responds to a hyper-immune response at the area where transmission of the bacteria occurred during intercourse. Occasionally, it may secrete a clear liquid with high levels of the bacteria, which becomes a focus of contagion through direct contact.

This skin lesion can occur on the skin of the genitals, anus, or as far away as the cervix, mouth, and lips or fingers, especially in immunocompromised patients.

During this period, syphilis is contagious even when chancre and adenopathy have not started.

An HIV co-infection could accelerate this period and its progression to more severe stages and complicate treatment.

During this period, which usually occurs around three months after the initial infection, the bacteria has already entered the blood and travelled throughout the body (a phenomenon called bacteremia), causing muco-skin lesions such as rash (red and abundant rash on the back, buttocks, hands and feet), swollen lymph nodes and general malaise: fever, headaches, nausea and minor visual and balance problems (inner ear affection).

In 75 per cent of cases, by the time syphilis becomes secondary, the chancre has disappeared.

With treponema pallidum in the bloodstream, any organ is vulnerable to this bacteria invading it and causing localized infections, such as endocarditis (heart), pneumonitis (lungs), or meningitis (central nervous system).

In 75 per cent of cases, by the time syphilis becomes secondary, the chancre has disappeared.

With treponema pallidum in the bloodstream, any organ is vulnerable to this bacteria invading it and causing localized infections, such as endocarditis (heart), pneumonitis (lungs), or meningitis (central nervous system).

In tertiary syphilis, there is no risk of contagion but there is a risk of more severe and systemic symptoms. These complications include cardiovascular syphilis (which can damage the structures of large blood vessels such as the aorta or the delicate blood vessels in the brain) and neurosyphilis. Both are difficult to treat and have a complex prognosis.

Tab ContentDuring this period, syphilis is asymptomatic and not contagious, although it can be detected by blood tests. This latency of the disease is further divided into two stages: early (less than one year after infection) and late (when it was more than one year after the infection occurred). The risk of this stage lies in relapses when the disease was not clinically managed (or treatment was insufficient)

Differences between men and women

There are no major differences between syphilis infections in men or women. Patients with weakened immune systems (regardless of gender) or pregnant women are treated more carefully.

Having an “unbalanced” sex life, with very frequent partner changes or a high number of unprotected sexual intercourse without latex condoms can increase the chance of getting syphilis in the future.

The existence of other sexually transmitted infections (such as HIV) is also often a recurrent history of syphilis.

How to preven it?

The correct and regular use of latex condoms is an important way to reduce the incidence of this disease, especially among the young population, the most affected. Also, avoiding unhygienic sexual practices or having sex with overly promiscuous people helps prevent the infection from spreading.

How is it diagnosed?

Diagnostic methods for syphilis are made from a blood sample or a direct swab at the area of the ulcerative lesion (chancre).

From a blood sample, specific serological tests for treponema pallidum (measuring antibodies for this microorganism) or general tests for this and other infections can be performed through the popular VDRL test.

Also, analysis of the suppurative fluid of the chancres or the removal of lymph nodes with a syringe may be performed. These samples are taken directly from the patient in whom the diagnosis of syphilis is suspected and are observed with darkfield microscopy, a highly reliable and relatively simple test.

In any case, the same clinical condition of the patient (presence of chancre, adenopathies, rashes, etc.) and a medical interview gathering their personal and sexual history may help to identify a probable case of syphilis. The rest of the analytical tests will be used to confirm or not the diagnosis.

How to treat the disease

Because syphilis is a bacterial infection, its treatment is based on the administration of antibiotics such as benzathine penicillin (synthetic penicillin).

In patients with hypersensitivity to this antibiotic, the use of other drugs such as doxycycline or tetracyclines is recommended.

These treatments are often given intravenously and simultaneously to sexual partners.

How is congenital syphilis treated?

Congenital syphilis is a delicate pathology, because it occurs in children, can cause deformities and, the use of certain medications that could cause damage to vital organs (such as liver or kidneys).

The treatment of choice is intravenous penicillin. In pregnant women infected with treponema pallidum, a single dose of this antibiotic is administered, especially in the first few months.

Having an “unbalanced” sex life, with very frequent partner changes or a high number of unprotected sexual intercourse without latex condoms can increase the chance of getting syphilis in the future.

The existence of other sexually transmitted infections (such as HIV) is also often a recurrent history of syphilis.

How to prevent it?
The correct and regular use of latex condoms is an important way to reduce the incidence of this disease, especially among the young population, the most affected. Also, avoiding unhygienic sexual practices or having sex with overly promiscuous people helps prevent the infection from spreading.
If i am infected, can i have sex?
Although doctors recommend reducing the frequency of sexual relations, provided that the patient is in medical control, constant check-ups and also protects him or herself and their only partner with the use of latex condoms when having sexual encounters, there are no drawbacks to maintaining an active and responsible sexual life. 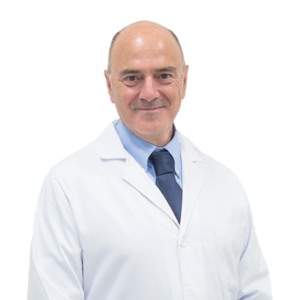